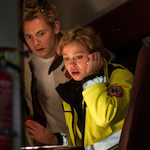 But that’s fine. However that one turns out, I’m glad it led to me to this really solid movie that uses simplicity to its great advantage. It doesn’t have to be epic to be a total rush. 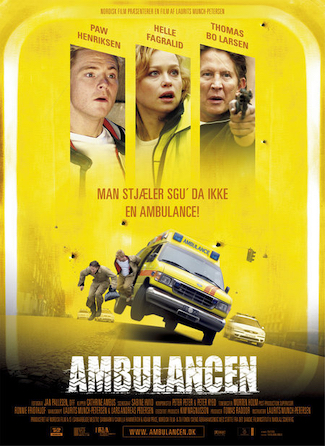 It opens with two brothers with stockings on their faces agreeing to do this for Mother, and not to shoot anybody, and entering a bank. The camera stays outside with their car. We hear a siren in the distance – cops already? No, it’s the titular ambulance, arriving for some unrelated emergency down the block. But then a cop does come. And a gun goes off inside. They come out in a panic, aren’t able to get to their vehicle, run down the street and see that ambulance ripe for the taking.

So right away we’re in this high speed car chase. They figure out how to turn the siren on to get the traffic out of their way, though this also makes them even easier to follow. They figure out how to listen to the police band on the radio. Later they realize there’s a tracker in the dashboard, tear it out and throw it in the back of a cattle truck. Good one, boys.

They make it to the junkyard where they stashed the getaway car, and that’s when they realize there’s a sound coming from the back and— yeah, duh, should’ve checked that before. There’s a nurse back there and the guy they were picking up, ’cause he just had a heart attack. Fuck.

The older brother is Frank (Thomas Bo Larsen, ANOTHER ROUND), who previously did 8 years for 7 robberies and insists that he’s not going back to prison. But he really is doing this to get money for their mom, who has cancer and was told she has two weeks to live but might survive if they can move her to a private hospital. The younger brother Tim (Paw Henriksen, LOVE AND OTHER CATASTROPHES) is not a (previous) criminal and not as hardened but believes this is the right thing to do.

We get lots of problem solving and lots of interpersonal conflict. They tie up the nurse, Julie (Helle Fagralid), take her walkie talkie, take her phone and throw it out the window. But she says this patient (Torbjorn Hummel) needs help, he needs a doctor, he needs a hospital. They’re not gonna do that so she has to figure out how to help him on her own, in the ambulance. Tim lets her get instruction over the radio and helps her administer an adrenaline shot. After the rush of helping to save a man’s life he becomes more invested in his survival, and tries to convince Frank to let them drop him off at a hospital. But obviously he’s not gonna say yes to that. That that would do them in.

Julie warms up to Tim. This might be too much for some. Let’s chalk it up to Stockholm Syndrome, though. Or maybe the back of an ambulance is just a romantic space. I don’t know. At one point she gets left behind, so she doesn’t witness all the worst moments. One particularly tense scene is when they crash the ambulance on the side of a road and stumble out all bloody, and somebody stops and tries to help. Tim yells at him that he’s fine and not to call anybody and the guy is like, “But… but…” I’m not sure he understands what’s going on, but it’s not a good situation for a well meaning passerby to find themselves in.

Frank is less caring than Tim, more practical. Well, mostly. I don’t understand his decision to smear black paint all over the ambulance.

Makes it harder to spot by the military helicopter looking for them, I guess, maybe, but geez does it attract attention. It’s a total mess and still obviously an ambulance and being driven by two guys not wearing uniforms and with wounds on their faces. You’re staying with these guys for the whole movie so you kinda feel like you’re in that ambulance with them, and man do you feel nervous driving around with these idiots.

It’s all about the situations and the acting, it’s not real slick looking. And always overcast. The music (by Peter Peter, who also did the PUSHER trilogy, BLEEDER and VALHALLA RISING for Nicolas Winding Refn) includes some kinda cheesy dance music beats when they’re driving fast. And the flashiest thing in it is CG shots going inside the patient’s body to show his heart beating and stuff. Trying to do a David Fincher kinda thing, maybe. But it doesn’t need more than that. It’s a thrill ride in a “did you see that guy almost crash, that was crazy!” sort of way instead of an over-the-top Hollywood way. It works, and then it’s over in 71 minutes.

AMBULANCE is the narrative feature debut of director Laurits Munch-Petersen, who had done a bunch of shorts and a documentary before that. Now hopefully he’s rolling in that sweet Michael Bay movie money in case his mom has any medical problems or anything.

bank robbery car chases Danish Helle Fagralid Laurits Munch-Petersen Paw Henriksen Tomas Bo Larsen Torbjorn Hummel
This entry was posted on Tuesday, March 29th, 2022 at 7:03 am and is filed under Crime, Reviews, Thriller. You can follow any responses to this entry through the RSS 2.0 feed. You can skip to the end and leave a response. Pinging is currently not allowed.