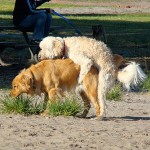 How’s it goin. Hope those of you who went had fun at your comic book convention. Who did the delegates end up nominating anyway? Was it batman? I tell you with these volatile times, I thought it was gonna be the ’68 Comic Con all over again, guys dressed up as stormtroopers running through the streets beating up Xena and Catwoman with plastic swords, rolling robots, setting dragons on fire. But it sounds like it was peaceful. I didn’t read any of that crap you guys wrote about it but I bet it was good. 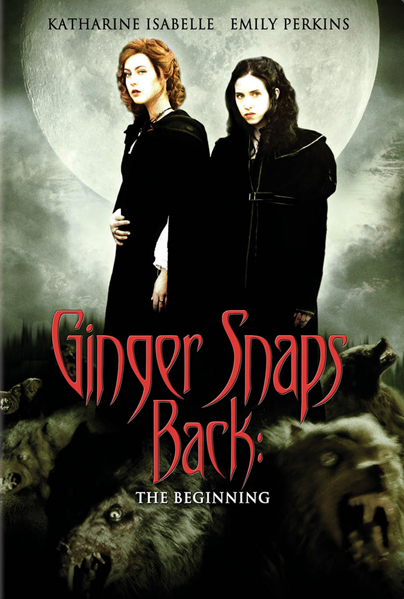 Anyway what I’m here for is GINGER SNAPS BACK. You guys probaly remember (how the fuck could you forget?) that I reviewed the first one, GINGER SNAPS (WHICH CAN BE READ HERE, YOU MAGGOT-RIDDEN PUSSBAGS) for you a couple years back, and then followed up with GINGER SNAPS 2: UNLEASHED (THAT’S RIGHT. MORE VERN TO INJEST…) not too long ago. Well now they’re already topping it off with GINGER SNAPS BACK: THE BEGINNING which transports everybody’s favorite brooding misfit death obsessed teenage Canadian soon-to-be-werewolf sisters into the Canadian frontier during the famous historical year of 1815. This is the story of how the magic of sisterhood overpowered destiny, prophecy and ancient Native American legend and stuck Brigitte, Ginger and the rest of Canada with a fucked up werewolf curse.

So it’s a prequel, but at first you can’t really tell for sure what the deal is. Because why the fuck are Brigitte and Ginger (still with those names) suddenly alive in the 19th century, wandering in the woods, saying their parents drowned and taking shelter in a fort with a bunch of musket-loving pelt traders? They mostly act century-appropriate but every once in a while they pull some modern teenage shit like saying “These people are fucked!” So if you watch it you’ll probaly be thinking “I never saw part 2, did they end with some weird EVIL DEAD 2 type time portal?” No, they didn’t, so it almost seems like it’s not so much a prequel as, like, a side-qual or something. One that isn’t exactly related because it takes place in a different plane of reality, just like WES CRAVEN’S NEW NIGHTMARE, where it’s a sequel to the Freddies but it acknowledges that those movies are only movies. And that the sequels suck. I don’t know what the word for it is, I think maybe it’s an alternal dimensional or something. Or like those comic books they have – don’t they have comics where it’s like “what if this happened?” What if instead of Bruce Wayne, it was Archie, and Jughead killed his parents. So Archie dressed up like a bat and him and Snoopy had to figure out who Jack the Ripper was. Or whatever.

Well this is like that only this time it’s what if Ginger and Brigitte were staying in a fort and the fucking men are always looking at them suspicious because they’re women and also because a bunch of werewolves keep attacking the joint, so who knows. Their suspicious turn out to be pretty justified though because before you know it some wolf-boy (he looks like the kid from MASK mated with a dog) bites Ginger and she starts slowly turning, just like in the first one, only earlier.

There is some business about a Native American hunter destined to protect them, and the father of the wolf-boy who doesn’t want to kill them, and the one way to stop the curse. And there’s a real good scene where the sisters decide to leave the place, but after they unbar the gate some asshole starts pointing his musket at them and they get in a big argument. Not realizing that the werewolves are gathering outside.

Just like in the first two there is not a whole lot of graphic werewolf running around shots. But there are alot more wolves, including dead ones that they pile up after the battle.

I think moving this story to the frontier has some big time disadvantages. What I really like about the other two is that they are smart teen horror movies. The stories are aimed at teenage girls who feel like outsiders – they treat their problems seriously and use horror scenarios as metaphors for the types of emotional troubles facing people at that age. In the move to the 19th century they lost most of that relatability. Now they’re just some gals fighting wolves. Not a whole lot of themes and metaphors involved. It’s also not as funny as the other two. Those were movies with straight faces, without any cute references or one-liners, but they still had a dark sense of humor about them. Not much of that here.

It’s another new director, this time the second unit director of part 1. He does a good job making it look nice. And the makeup is real good. Both the girls look spooky as hell, the wolf boy is great and the werewolves look pretty vicious. Best of all, Ginger and Brigitte give two more solid performances. Ginger is back in the spotlight for those who missed her in part 2, but I still think Brigitte is the most interesting. I’m surprised these movies haven’t gotten her a whole lot of other jobs. On the other hand it’s hard to imagine her in a role where she had to be happy and not pout.

Overall this is the weakest of the three. It’s definitely not bad, but it’s not all that memorable. Still, I hope they do another one, this time with the two girls getting bit by a mutant werewolf in post-apocalyptic Canada. Or a Blade Runner type megalopolis. Or in space! Part 4’s often take place
in space.

p.s. there could be a robot werewolf in space, who knows what could happen. or martian werewolves on the moon. Anything.

Canadian Grant Harvey JR Bourne werewolves
This entry was posted on Tuesday, August 3rd, 2004 at 6:56 am and is filed under AICN, Fantasy/Swords, Horror, Reviews. You can follow any responses to this entry through the RSS 2.0 feed. You can skip to the end and leave a response. Pinging is currently not allowed.