Well that was a pretty good special feature, but as a movie it’s even better. What this is is a “cinema verite” or “direct cinema” or “not narrated” type documentary about the famous maniac/journalist. The directionist followed Dr. Thompson for several years, often acting as his road manager so as to get a chance to film him. Of course this is shot in recent years so there is a heavy emphasis on the making of the FEAR AND LOATHING movie. He celebrates anniversaries, receives honors (including a party from his old friends at Rolling Stone) and reunites with Ralph Steadman, who has come to support him and do some real high quality court room drawings as he fights a phoney charge of drunk driving. 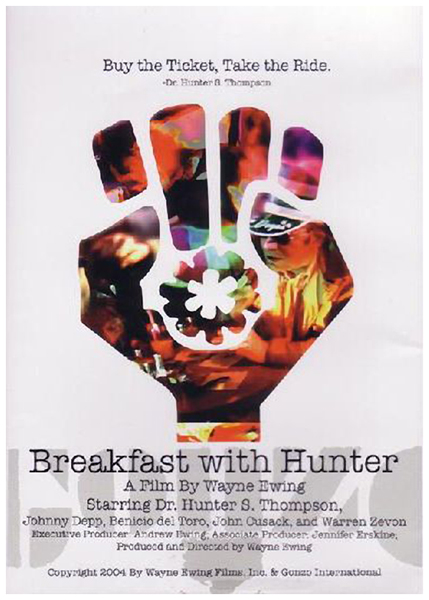 Now you’re probaly thinking the same thing I was thinking: sounds pretty cool. Pretty cool. Like, some home video that you could watch once if you like Hunter S. Thompson. And then somebody would say, “How was it?” and you’d say, “Mm, pretty cool.”

But I think this one’s actually alot better than that, for two reasons. First, the guy happened to catch some real good stuff on film. Or, tape. Or whatever. Second, he edited it together real well, skipping around through time but connecting all the scenes logically together to tell the story.

The first time you see Thompson in this movie, he is pulling up to the Viper Room in a convertible, with an inflatable sex doll hanging out the side. He’s accompanied by two cool lookin dudes with cigs hangin out of their mouths, and as they step out you realize they are hollywood actors Johnny Depp and Johnny Cusack. They go inside and do a reading/question and answer session where Depp (not yet cast in the movie) ends up reading the famous “wave” speech from F&L and Cusack to his surprise has to read a threatening surrender letter that Hunter had just written to his local sherriff.

Depp is in alot of the movie, hanging out with the doctor, trying to learn how he lights his cigarettes, etc. They shoot guns together, and later Depp tries to get Hunter to teach his bird how to talk. He tries to get it to say, “You won’t be alone.”

There’s a real good scene where Dr. Thompson meets up with Ralph Steadman, who did those great squiggly, splattery drawings in so many of Thompson’s books and articles. They talk about the anniversary of F&L and end up in a heated discussion where it comes out for the first time that Steadman has some resentment about not getting enough credit for the success of the book. And Thompson doesn’t give him an inch.

Later this touchy subject becomes the theme of the most memorable scene in the movie. You may remember that Alex Cox (best known for REPO MAN and SID AND NANCY but also did the great WALKER) was going to direct the FEAR movie before Terry Gilliam took over, but he had some kind of creative type differences with Thompson. Well, in this scene we see those differences real clearly. Cox and his writing partner Tod Davies visit Hunter at his house to discuss their script. He says he hasn’t read it and asks how they approached the two separate trips to Las Vegas that make up the book. Do they combine them into one trip? Do they just show him getting on a plane and coming back?

Davies tries to explain that they want to use a symbolic approach where an animated Thompson (like a Ralph Steadman drawing) is swept back to Vegas by a big animated tidal wave (referring back to the passage we saw Depp read earlier). This idea absolutely outrages Thompson. And he just starts flipping out, yelling about Mickey Mouse and Saturday morning cartoons and how they want to degrade one of the best pieces he’s ever written. Apparently someone led Cox and Davies to believe that Thompson would like the idea of using animation, and they make the mistake of trying to convince him that it’s a good idea. The scene must go on for more than ten minutes (on the director’s commentary he says the actual incident lasted more than two hours) until Thompson is so mad he says, “That’s two, you don’t want to get to three.” Cox laughs and he and his partner get the hell out of Dodge. As they’re still leaving Thompson yells into the phone, leaving a voicemail to the producer about “poor Alex Cox just left here in tears.”

Of course, you have to feel sorry for Cox and Davies in this scene. Their idea is wrong but they obviously want to make Thompson happy. But it doesn’t seem like he believes that. And maybe because of his earlier conversation with Steadman he is being completely unreasonable about it, acting like he has no idea why anyone would associate the illustrations from the book with the book itself. Like he wants nothing to do with them. Every filmatist who has to adapt the work of a famous author should watch this scene, although it will give them nightmares. It is so tense that on the commentary the director says that he was genuinely worried for Cox’s physical safety.

By the way when I say Steadman I’m still talking about Ralph Steadman. Not the dude Oprah is married to. I hope you knew that.

That scene is really amazing, the kind of thing us movie “nerds” read about but you never get to actually SEE it like this. So that’s the most notable scene in the movie, but there’s alot of other good stuff. Benicio Del Toro hangs out with Thompson (and actually watches the footage of his blowup with Cox and Davies). Matt Dillon, George Plympton, PJ O’Rourke and George McGovern make appearances. There are some peacocks at one point. And there’s a real good scene where Thompson’s mysteriously normal son speaks to the audience about what he’s learned from his father. It’s real touching and then Dr. Thompson jumps out and sprays his son with a fire extinguisher.

If you’re real hardcore, there are some good extra features too. Lots of good deleted scenes, including one where Don Johnson (don’t ask me) reads a story about fucking a cat. The director’s commentary is very interesting, and it even has Thompson on the first 30 minutes, before he wanders off.

If you’re not familiar with Thompson at all, I think this would still be pretty interesting. If you’re already a fan, you should definitely see it. Good stuff.

I don’t know why it’s called BREAKFAST WITH HUNTER though. He cooks sausage and what not but I’m not sure why that’s important. the end.

Hunter S. Thompson
This entry was posted on Thursday, July 8th, 2004 at 3:10 am and is filed under Documentary, Reviews. You can follow any responses to this entry through the RSS 2.0 feed. You can skip to the end and leave a response. Pinging is currently not allowed.