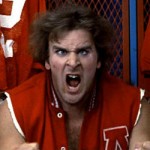 This movie focuses on the web when it was first becoming a phenomenon, and in particular it focuses on the web journal type web sight. Although at times my sight can be PRETTY fucking personal, I have never quite understood that type of web sight. Because everybody likes to Write all about themselves, yeah, but who the fuck wants to read it? At least I talk about Vin Diesel and shit, to reel them in. I don’t think I’ve ever sat down and read somebody’s random musings of the day. Not to be harsh but I really don’t give two and a half fucks about your relationships, even if you do Write in all lower case. 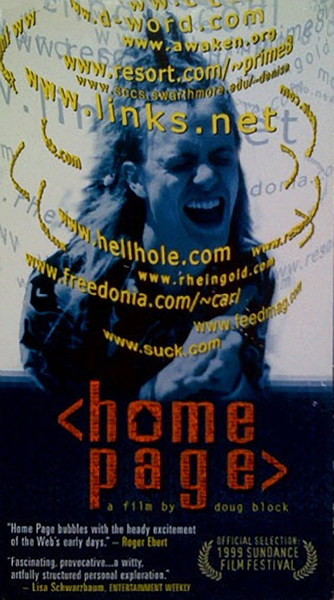 Well to be frankly honest you would think that the only thing more boring than reading some college kid’s web diary would be watching a documentary about reading some college kid’s web diary. But this movie actually kept me interested. It comes from an outsider perspective of a man who first starts using the web back in the magical naive time of a couple years ago, when everybody was starting to get AOL and Earthlink, even grandmas and ex-con movie buffs. You really get a feel for the time this takes place when the director’s parents decide to get a new computer and start using e-mail.

And there’s the lingo, too. Everybody calls web sights “home pages.” People feel comfortable speaking aloud web slang like “IRL” for “in real life.” There is even a part where a young gal refers to “cyberganic SF people”, whoever in fuck’s name they are. (They turn out to be people in halloween costumes as far as I can tell.) And they never talk about reading a web sight, they talk about ACCESSING it. Have you ACCESSED my HOMEPAGE yet? It’s about CYBERGANIC SF issues.

This movie is great as a time capsule of a time when all this seemed new and exciting, nobody at all took it for granted, and people were actually interested in asking these questions. How much do you really want to reveal about yourself on a web sight? How many people will see it? Is it crazier, or less crazy, than revealing it in public? Is it fair to reveal the intimate details of your life when there are other people involved in those details?

Also, everybody in this movie keeps talking about the endless possibilities of the web. And they really think they’re there. But they’re only possibilities, not actualities, which means they have no idea what exactly these possibile things are that they’re talking about. But there’s something that the web will be able to do, they’re pretty sure, and it will be revolutionary.

The main character is Justin, who is sort of notorious/famous on his campus because he Writes bad poetry about whoever he last had sex with and publishes a naked picture of himself. People seem to admire and fear him because he is so eager to reveal his secrets to the world. For example, that he once figured out how to suck his own cock.

I guess I can understand sort of where Justin is coming from because I once Wrote about having tubes shoved in my ass and my dick, sitting bareassed on a cold metal stirrup chair while “Can You Feel the Love Tonight” played on a boombox. That was a little personal. I sometimes still wonder if I shoulda put that online. It’s not like I ever talked to people about it. But for some reason Writing that down, and more than that, putting it out there where anybody bored enough could see it, helped me deal with it. Purge that memory. I mean today, if I had really bad taste in music, I could probaly listen to the Lion King soundtrack without my orifices tightening reflexiveley. I mean maybe. I could at least try.

The point is, something compelled me to share that unpleasant information with all of you, and not with my friends at home, and that is something that is increasingly common with this sort of new technology, for good or bad. But I think that piece was not only my most personal, but my most honest. And to this day I still get the occasional e-mail from a new reader who has just read that column and was moved by it. Even by a few people who had similar procedures although with other Disney soundtracks being played, or none at all. I think what I did was a little more meaningful than just throwing my life out there for shock value.

Besides if I figured out how to suck my own dick I’d include detailed instructions, to give back to the community.

Anyway this guy is Writing about himself all day and at the time that was a novelty, so he gets Written up in magazines and some jackass throws out a comparison to Jack Kerouac. Next thing you know Howard Rheingold, an author who looks like Jeffrey Tambor in Zubaz pants, hires Justin to come live with him and help start a new… online magazine? Or something. Something cutting edge at the time, I guess.

The director of HOME PAGE doesn’t seem to understand what Justin’s new job is, so he asks Howard. Howard sort of hems and haws and then calls Justin his “guru.” Remember, this was the pioneer days. It was a new medium, so it required a new type of work, where people carved out their own job descriptions. Justin’s was to walk around the house with no shirt on, occasionally laughing ghoulishly. When a spanish news crew comes to interview the two of them, Justin does his interview shirtless, laying on the couch, his lower half covered by a blanket. You can tell these guys are thinkin wait a minute, what’s goin on here?

So as the movie rolls on, we meet other computer people connected to Justin, including one guy who seems like a typical computer nerd who shows us his office and his “macquarium” which I guess is an old Macintosh that he plans to put a fish in some day. He talks in a squeaky voice and he likes computer humor and his web sight got bought out by a company so now he gets paid to do what he likes, but he doesn’t have enough money for a separate apartment so he sleeps on a metal Ikea bed frame by his cubicle. Oh yeah and he has a journal online too and that’s why everybody knows the details of the truck accident that killed his girlfriend and her sister and how his father hung himself.

You gotta feel sorry for that kid and then there’s the other guy who doesn’t get to talk to his wife very often, but read on her web sight about the guy she’s been fucking.

But the most intimate interviews are actually with the director’s family – his parents and especially his wife, who seems annoyed by the documentary, and the new computer obsession. He starts keeping an online diary of his own, and he asks her if she’s read it. She says she hasn’t mainly because it’s private. Even though it’s online, and he’s her husband. I mean I know how it is. Alot of the people who are closest to me don’t read my shit either. So does that make you guys closer to me than them? Because you haven’t seen me in person before, but you know not to sing “Can You Feel the Love Tonight” around me?

But at the same time, his wife is obviously trying to understand him, and to consider the questions he is asking with his documentary, and she is usually near tears when he interviews her, like she’s afraid their marriage is falling apart when she’s answering these questions on camera. (It turns out okay though, don’t worry.)

I’m not sure how much I like any of these people, or how important any of these questions are anymore. But I think this movie is worth watching and will be even better the more out of date it gets, the more absurd it seems that these people really thought they could MAKE MONEY doing this shit.

Make money! Ha! Imagine if somebody had tried to buy MY sight. There WAS a young man who wanted to option my life story for a movie, but all he could pay was $1 (I think I haggled him up to one pack of cigarettes). But I mean that’s understandable, my life IS a movie. You can’t blame the young man. It would be an entirely different deal though if some corporate schmuck thought that my sight was the next cultural laser to cut a swath through the new medium of electronic communication or what have you. I mean that was happening to people every day. Little web sights turning into corporate magazines, web toons being optioned for tv shows, or to put on dvd. And almost all of it was crap! I mean I make crap too, I shoulda been picked.

I really don’t know if I would’ve taken the money or told them to shove it up their ass. I will consider offers though. Thanks millionaires.

This entry was posted on Wednesday, January 1st, 2003 at 4:08 pm and is filed under Documentary, Reviews. You can follow any responses to this entry through the RSS 2.0 feed. You can skip to the end and leave a response. Pinging is currently not allowed.