Way back when when I first compiled THE BADASS 100 there were alot of individuals recommending for me to watch the LONE WOLF AND CUB, aka the BABYCART series. I sort of vaguely knew what they were talking about. Something about a samurai and a baby. I’ve seen the boxes before and they got kind of ugly design with some black and white pictures. I felt like, you know, I’m sure it’s good, I’ll get it some time, probaly. The truth is I get alot of recommendations and I always want to follow them but you know how it is. There are so many movies out there. You never get to watch all of them.

I gotta confess that it was the SHOGUN ASSASSIN reference in KILL BILL V.2 that finally reminded me to watch these fuckers. I knew SHOGUN ASSASSIN was a good old american style assfucking of the first two pictures in the LONE WOLF and I decided to pick up the first one, known here as SWORD OF VENGEANCE. 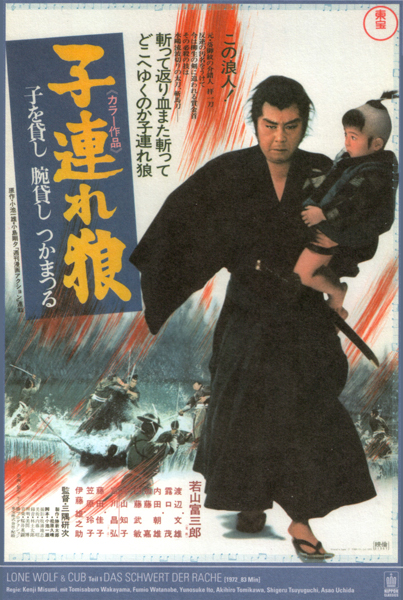 And right away the first question I had was MAN, what the fuck was I waiting for? It’s not what I imagined at all. This is not some cheesy martial arts type picture, it is real good filmmaking and epic storytelling and as so many of you knew before me it is absolutely classic grade-A Badass Cinema.

For all you ignorant fuckers out there let me explain what this is all about. It is the story of Ogami Itto, who was the shogunate’s personal executioner. A motherfucker so amoral that in the opening scene he chops off the head of an adorable child. Just doin his job, man. Pimpin ain’t easy. You are now about to witness the strength of street knowledge.

You know Ogami plays by the rules and everything but next thing you know his wife is killed and he gets framed for some dishonorable type shit and he’s gonna be executed. So he decides it would be a good time to “live the life of a demon” by becoming a hired killer. And he gives his baby Daigoro a choice – take this toy ball, or take this sword. If you take the ball, I’ll kill you and you’ll go to heaven. If you take the sword, you’ll come with me and we’ll be hired killers together and who knows maybe we will have a babycart that has many cool weapons hidden inside it. Not to give anything away.

So then he wanders around with the adorable Daigoro in a babycart and he takes on jobs as an assassin and this asshole Yagyu keeps giving him guff. Ogami will get down to business with some other ronins or ninjas or somebody and without fail this old bastard Yagyu is out there whining about some stupid shit. But not doing the fighting himself.

My favorite scene is when Ogami is having a duel with a samurai. They are running straight at each other in the field and Yagyu is bragging about how Ogami is weighed down by the baby strapped to his back, but the other dude only has the sun on his shoulders (meaning that the sun is behind him and will get in Ogami’s eyes). Well at the last moment Ogami ducks his head down, revealing that his baby Daigoro has a mirror attached to his head, which reflects the sun into the other guy’s eyes. And then SHHKKKKK, suddenly the guy has no head. And then the blood sprays out, and then the body falls to the ground.

The actor who plays Ogami is kind of a latter-day Seagal-type fat dude, and his hair is unkempt. He is not a real friendly type of dude. He always looks like he’s sleepwalking and half the time when people talk to him he seems like he’s not even paying attention to them at all. And then he keeps pulling clever murders like that.

And he has a baby! What better illustration could there be of Vern’s Theory of Badass Juxtaposition? Here is the baddest, shinobi–killingest motherfucker you’ve seen, who has a cute little baby with him at all times.

LONE WOLF AND CUB #2: BABYCART AT THE RIVER STYX

samurai
This entry was posted on Monday, January 1st, 2001 at 8:16 am and is filed under Action, Drama, Reviews. You can follow any responses to this entry through the RSS 2.0 feed. You can skip to the end and leave a response. Pinging is currently not allowed.

One Response to “Lone Wolf and Cub: Sword of Vengeance”