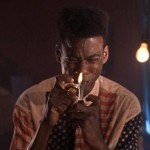 There are many surprises in the picture. For example, Betty is not really a nurse. I mean you go see a movie called Nurse Betty, you expect AT THE VERY LEAST this Betty gal is a nurse. But no, she is a waitress who wants to be a nurse, and is obsessed with a doctor on this one soap opera. Then Chris Rock and Morgan Freeman kill her fuckwad husband right in front of her, and she goes wacko and goes across the country thinking she has to reunite with her “ex-fiancee”, the fictional doctor from the soap opera. So Morgan and Chris follow her around and then she meets the actor who plays the doctor.

But get this, when she calls him by his character name and introduces herself as his ex-fiancee, he doesn’t know she is an obsessed fan, he thinks she is an aspiring actress doing an improv exercise with him. So the motherfucker hires her for the show!

So okay, there is alot of funny scenes in there, and at least one dramatic one. But I still couldn’t help but feel a little betrayed by the critical Cinematical type community that has been hyping this piece up as the adult sophisticated comedy we have all been waiting for. Yeah, if all you’re comparing it to is the farting movies that eddie and martin did. But this is not exactly the next step in the evolution of the laughter. There was one gal in the back of the theater who kept stomping her feet on the floor she was laughing so hard but I don’t think most people will be able to bust a gut over this one.

And the more serious beginning scenes had me ready for a little more fucking weight to this picture. I didn’t know it was gonna turn out with a totally phoney ending like every other fucking comedy, and with the little title telling what happened to betty. I’m not against combining the comedy and the drama. In fact, I came up with a term for it, if you ever need to describe a combination between a drama and a comedy, you just combine the two words into one it is called a coma. But I don’t think this particular combo works all that well. It just don’t gel.

I mean I’m not gonna give away that they hire her for the soap opera at the end even after finding out she’s a stalker but jesus when you guys see what happens at the end I think you will agree that it’s as phoney as a $100 bill made out of a napkin.

Don’t get me wrong, this is a fine entertainment picture and enjoyable on at least one level. It has a sweet if obvious message about how you should chase after your dreams, and how these nutballs who stalk John Lennon, David Letterman, Jodie Foster etc. are actually cute and funny. Alls I’m saying is that it’s pretty much just a light hollywood comedy about stalking and not anything real edgy or envelope pushy. I heard a certain individual compare it to Pulp Fiction and I must’ve misunderstood what the motherfucker was saying but it made me expect a little more gravity. This is not a picture that will blow you through the wall unless you’re the type of individual that considers “Aaron Brockovich” steve soderberg’s best movie. It’s more like a script that could have gone to chris columbus, but instead went to whoever the independent fellow is who did it, who was able to make it easier to stomach.

I liked this Aaron Eckhart in his small part as an asshole with a bad haircut. He made the character very believable and hissable, at least until they made him throw out an indian racial slur out of the blue to set up what chris rock does to him. I mean you people who saw this, I dare you to tell me that scene worked. What in fuck’s name. Anyway I liked seeing young Chris Rock play a character that was a little different from his usual persona. And I guess Morgan Freeman was good as usual but I couldn’t help thinking he was the lite comedy version of Jules Winfield from the aforementioned, underappreciated 1994 crime film Bruce Willis’s Pulp Fiction. I guess his character must’ve seen that movie because his intimidation methodology was lifted wholesale.

I mean we in the audience, it is important for us always to remember Pulp Fiction, and how good it is. But you filmmakers… jesus, forget it! DO NOT LET IT INFLUENCE YOUR DIALOGUE OR CHARACTERS. Never watch it again unless it’s just to remind yourself of the standard you are expected to live up to. I wasn’t even around most of the ’90s even I am about to puke from how much you retards copy mr. tarantino even to this day. Let’s move on people it’s the year 2000, you are supposed to be copying the matrix now. thank you and have a nice day.

Chris Rock Morgan Freeman Neil LaBute Renee Zelweger
This entry was posted on Friday, September 8th, 2000 at 1:04 am and is filed under Comedy/Laffs, Crime, Reviews. You can follow any responses to this entry through the RSS 2.0 feed. You can skip to the end and leave a response. Pinging is currently not allowed.