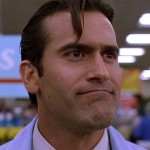 Okay I’m gonna be up front about this. I know very well what you motherfuckers expect out of me this week. I’m not stupid. You think just ’cause I’m an ex-con I’m gonna spend this whole column gushing all over that new three hour prison movie that motherfucker Tom Hanks has.

Well okay no that’s not true at all. Actually I just haven’t seen the movie yet. It’s hard to get three hours free to watch yet another Tom Hanks prison guard movie when you are a Writer like myself who is busy sculpting words or experiencing life which to be frankly honest is the most important element of a man’s Writing.

I promise I will Write a review of the green mile at a later date however right now I am preoccupied with a new discovery of mine which, I gotta be honest, is much more important. So in the tradition of my life lets set the prison aside and look forward to the future.

You see, this weekend I rented a few movies on the recommendation of some rec.arts.movies.current-films guys and in these movies I discovered an unknown actor who I believe will blow that jackass Tom Hanks out of the fucking water. This is a man who has barely hit the scene however in the glimpses of him that I have seen I have detected a raw, powerful talent which I believe you also will appreciate some day.

When I tell you this man’s name you will say “Who?” You will have no idea who the fuck this is. You might even think I am making him up or that he is a friend of mine whose career I am hoping to give a kick in the ass. Well hell all you gotta do is trust me on this one. If all is just in the world (and I know it’s not, but what the hell) then this man will soon have a loyal cult following. People will obsess over him on the newsgroups. They will worship him. They will rent any movie that he appears in. When they talk about whose going to play Batman or Superman or Spiderman or whatever cartoon strip movie they’re making now, they will say this dudes name first. They will always try to say he should be a leading man in the big movies. This dude will be called a god, like that chow young fat. He will be an icon.

The name of this dude is Mr. Bruce Campbell.

See what I mean? You never even HEARD of this dude. Until now. Write that name down. Make note of it. And remember who told you about him first. Because mark my words this man is going to be huge. When people get wind of his talents, you will almost wish they hadn’t, because you will be so sick of hearing about him.

If you want to be in on this thing before anyone else, here’s what you do. Go rent a little known movie by the name of Evil Dead Part 2. This was my introduction to Bruce and it is a good one. This is a very well put together little horror and it also is very funny.

Bruce plays Ash, the most unlucky motherfucker in the world, who like another famous Bruce, finds himself in the wrong building at the wrong time. In this case it is a cabin surrounded by woods that are haunted by cackling bitch demons and invisble flying camera monsters.

The movie starts out seeming pretty routine. Bruce comes into the cabin with his girlfriend, they make jokes, he plays piano. But then this movie decides fuck it man, I’m not waiting around for the usual “character development.” Let’s get straight to the horror. Within about five minutes the girlfriend gets possessed and Bruce cuts her head off with a shovel and at that point – it’s on.

The team of filmmakers led up by a young man by the name of Mr. Sam Raimi are endlessly imaginative. I mean these motherfuckers never fucking quit with the invention and cool ideas and what not. One of my favorite parts is when Bruce’s hand gets possessed and starts breaking plates over his own head and fighting himself. This is a great scene almost like Buster Keaton or Charlie Chaplin or whichever one of those silent movie dudes was known for this type of shit. Hilarious.

However at the same time you can see how this would be a real pisser if it happened to you and you want to see how is Bruce going to deal with this. Well I’m glad you asked because this is where Bruce proves that he is a true hero when he stabs his own hand, then saws it off and yells “Who’s laughing now!?!” as the blood sprays on his face.

Finally, a character in a horror movie who has a little common sense. Usually it’s hard to relate to these pussies in the horrors but this is a real standup motherfucker in my opinion.

Another scene which I heard about and decided to rent the movie is the scene where an old lady demon is in the cellar and she gets a trap door slammed on her head. Well what happens is her eyeball pops out and lands in a gal’s mouth and she swallows it.

Well I agree this is a very funny cartoon type scene however maybe I don’t appreciate it as much as some people due to the fact that this type of thing actually happens pretty often in the joint. As you know sharpened objects are the #1 most popular fad in all prisons. Well I don’t think it’s a coincidence that glass eyes are #2.

So in the can you see a lot of funny shit going on with people losing their glass eyes or playing a joke with them or whatever. In fact glass eyes are misplaced so often in the inmate society that most institutions started engraving serial numbers on the back so they can return them to the owners easily. It also helps prevent fights over glass eyes since you can easily prove who the real owner is. I know this sounds like a joke but I swear on my poor mother’s grave it’s true. You would be surprised how many motherfuckers serve their time, then get back into b&e or whatever, and get caught ’cause they drop their glass eye at the crime scene and it gets traced back to them by a serial number. Cons always make those type of dumbass mistakes and end up back where they came from, and that is one reason why I have decided to live a life of Positivity.

Anyway, this Sam Raimi shows a lot of potential in these evil deads unfortunately I looked him up and it turns out he’s just doing baseball movies now. So lets focus on Bruce.

You see what is special about Bruce is that he is able to be a completely physical actor, combining the stunts and punishment of a Willis or a Lee with the comedy of whichever Bruce is a great physical comedian. Not many actors could pull off a fight with themselves, but that is not all Bruce does. He fights with demons, he crashes through doors, he cuts off his hand, he falls downstairs, he gets stabbed, he gets turned into a demon, he goes crazy, he flies, he falls in a puddle. Like I said this motherfucker is having a bad fucking day. And thats not even mentioning the shit that happens in part 1.

Well there is another movie where Bruce shows another side to his talents. This movie is Army of Darkness and it has so many similarities to the Evil Dead films it could almost be called an unofficial sequel. In fact his character even has the same name (!) but it takes place in the mideival knights and sorcerors type time period and although he has a chainsaw for a hand like in Evil Dead 2, he also has a robotic hand that he builds.

While in Army of Darkness Bruce continues to show his talents as an action star (riding a horse, sword fights, demon fights, skeleton fights, tiny versions of himself fights, splitting in half, etc.) he also expands his range as an Actor. There are other humans in this one so Bruce gets to talk a lot more and I tell you, he is funny. He also gets to play two characters, one of them an evil version of himself but fortunately he doesn’t get too carried away or wear a fat suit like if he was Eddie Murphy.

Bruce has kind of a big ego, kind of an asshole and feels very superior to these mideivals. This makes him a funny hero and the movie is full of the “oneliner” type joke. I hope I’m not getting too carried away here, but I think he is as good or better at it than Bruce in Die Hard.

If anyone out there is lucky enough to have seen these movies, I think you know what I’m talking about. I’m sure most of you though better track these things down and check it out. Because you mark my words, one of these days movie fans are going to catch on to this guy. In fact I would not be surprised if he gets his own TV show. Then, like Bruce Willis, he will go to the big screen and although he will face the stigma of the TV actor on the big screen, he will overcome. In fact I will try to get a hold of this guy and see if he would consider an Evil Dead 3 which could be a big break through in my opinion.

So, all you cinephile motherfuckers out there, this is my gift to you for Christmas or Hannukah or Kwanza or whatever, and you deserve it. The films of Bruce Campbell. Watch them, love them. Believe me, some day soon you won’t be the only one.

Bruce Campbell Evil Dead
This entry was posted on Monday, December 13th, 1999 at 6:10 am and is filed under Action, Comedy/Laffs, Horror, Reviews, Vern Tells It Like It Is. You can follow any responses to this entry through the RSS 2.0 feed. You can leave a response, or trackback from your own site.