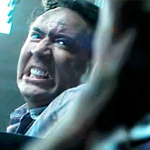 But in 2017 Taylor made his solo directing debut with MOM AND DAD and for my money this is his best movie. (He has subsequently done two seasons of a SyFy series called Happy! which I’ve heard some good things about.) It’s not like he’s changed what he’s about. He’s still using gimmicky camera moves, cheeky needle drops and spastic cutaways, and you better believe he’s gonna repeatedly slap you across the face with bursts of rockin guitars and blip bloopin dubstep electro-burps (score by Australian DJ/producer Mr. Bill). But it feels more under his control, more like a storyteller strategically employing chaos in service of a story, less like a dude with no pants on blowing two airhorns in your face and uncontrollably giggling about how funny it is that he’s doing it. END_OF_DOCUMENT_TOKEN_TO_BE_REPLACED