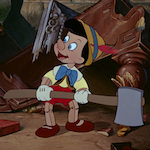 In 1992, Walt Disney Animation was on an undeniable upswing. WHO FRAMED ROGER RABBIT had been a smash in ’88, THE LITTLE MERMAID reignited their musical fairy tale formula in ’89, BEAUTY AND THE BEAST was so respected in ’91 that it got a best picture nomination, and they had ALADDIN coming out in November. It would be funny if they felt the need to re-release classics in the summer to sabotage potential competitors, since ROCK-A-DOODLE and FERNGULLY were long gone by June 26th, 1992 anyway. But I think this was just a reliable money-making technique they had developed, to release an old one in the summer and a new one at the end of the year. Remember that in last year’s summer of ’91 retrospective I got to review the re-release of 101 DALMATIANS, which was really not needed to stave off ROVER DANGERFIELD, in my opinion.

The “WALT DISNEY’S CLASSIC” for 1992 was the studio’s second-ever animated feature, PINOCCHIO, returning in celebration of its 52nd anniversary, I guess. 1940 was the same year Daisy Duck made her debut in Mr. Duck Steps Out, Bugs Bunny made his in A Wild Hare, Woody Woodpecker made his in Knock Knock, Abbott and Costello made theirs in One Night in the Tropics, and Captain America and Bucky made theirs in comic books. It was the year of Charlie Chaplin’s THE GREAT DICTATOR, the year DUNKIRK happened, the year Winston Churchill became prime minister, the year the first McDonald’s opened, the year nylon stockings came out. Pretty long ago. END_OF_DOCUMENT_TOKEN_TO_BE_REPLACED