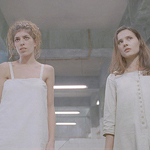 When I watched THE TALL MAN recently I thought it was writer/director Pascal Laugier’s first English language picture. Turns out his one feature before MARTYRS was also in English. Coincidentally this was produced by Christophe Gans, whose CRYING FREEMAN I reviewed recently too. Laugier was apparently Gans’s assistant, and director of the BROTHERHOOD OF THE WOLF making-of documentaries. (I wonder what kind of crazy unpredictable plot turns those had?) I guess he also appears in the movie itself, playing the assistant to Machemort, whoever that is. I wonder if he’s friends with Mark Dacascos? END_OF_DOCUMENT_TOKEN_TO_BE_REPLACED

Yes, this is the Fight Club type of movie. You know, the type of movie that is released by Fox, based on a popular novel, crammed full of first person narration criticizing the culture. These type of movies have really beautiful widescreen photographical techniques as well as little showoffy computer camera gimmicks and wall to wall techno music. They are generally about a character who is fed the fuck up with American consumerism and superficiality who wants to leave it all behind and push himself to the limit and seek out danger and blah blah blah. Then they get involved in a secret counterculture which at first is fun and utopian and represents everything they want out of life. But there is always a hint of danger and then one of the colorful supporting characters gets some kind of injury – usually a gunshot blast to the head or shark bite – but the counterculture handles the situation in a heartless bastard of a manner which signals the turning point when you start to realize WELL FER CRYIN OUT LOUD, the counterculture is just as fulla shit as the culture itself. At this point in these type of movies the character either goes crazy or finds out he’s been crazy all along, and then they start having delusions about the founder of the secret counterculture, who is some kind of intensely charismatic wacko, who starts to take on sort of superhuman powers, and blah blah blah. You know the type of movie I’m talking about. END_OF_DOCUMENT_TOKEN_TO_BE_REPLACED