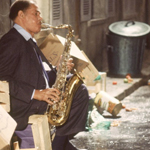 (The Oscar went to Paul Newman for THE COLOR OF MONEY. Herbie Hancock did win one for ‘ROUND MIDNIGHT’s score, taking out James Horner’s ALIENS and Ennio Morricone’s THE MISSION.) END_OF_DOCUMENT_TOKEN_TO_BE_REPLACED