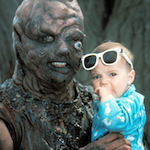 THE TOXIC AVENGER didn’t catch on right away. Troma had trouble finding many takers, but the Bleecker Street Cinema in Greenwich Village showed it as a midnight movie and it was so successful they ran it for more than a year. This secured a cult reputation that helped it become an actual hit on video. But according to the book All I Need To Know About FILMMAKING I Learned From THE TOXIC AVENGER by Lloyd Kaufman and James Gunn, Kaufman never really considered a sequel until a misinformed buyer approached him at the 1987 Cannes Film Festival to secure the German rights to the sequel and he just went along with it.

(Like most of that book I suspect that story is exaggerated, but we know at least that they didn’t rush one into production. In Prince terms, part I is the year of PURPLE RAIN, part II the year of BATMAN. Entirely different eras.)

THE TOXIC AVENGER PART II (1989) picks up where THE TOXIC AVENGER left off, sort of, with the city of Tromaville now peaceful and happy thanks to the Toxic Avenger’s crime fighting. Melvin now has the last name Junko instead of Ferd (no explanation), is nicknamed “Toxie,” and is both played and voiced by Ron Fazio (BASKET CASE 2), except in some scenes where he’s played by John Altamura (“Muscle Man,” YOUNG NURSES IN LOVE) before he was fired for allegedly being a pain in the ass. Toxie’s blind girlfriend Sara is now named Claire (also no explanation) and is played by another musician, Phoebe Legere (MONDO NEW YORK, KING OF NEW YORK). In narration, Toxie explains how he became a “hideously deformed monster hero of super human size and strength” and that the people of Tromaville now enjoy “dancing in the streets, tattooing, manufacturing orange juice, exterminating vermin (this is literally referring to cockroaches and stuff, not Toxie stuffing mops in people’s faces), and watching excellent movies,” which of course is illustrated by a marquee saying “TROMA FILM FESTIVAL,” even though they presumably live in a world where Troma’s best movie does not exist. END_OF_DOCUMENT_TOKEN_TO_BE_REPLACED