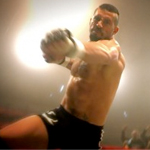 When he’s not grouchy he’s broody, because he doesn’t consider the slate clean. He’s still very religious, and feels a duty to donate most of his earnings to his church. The father disapproves of his “violence” and questions whether he can seek salvation while still fighting. But Boyka says “I think God gave me this gift. And I think it would be a sin to waste it.” END_OF_DOCUMENT_TOKEN_TO_BE_REPLACED