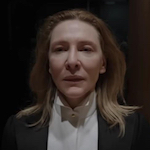 By now if you’re the type of person who would see TÁR but hasn’t seen TÁR you’ve probly already heard that TÁR is good and you don’t need me to sell you on it. It is indeed a great acting vehicle for Cate Blanchett (HANNA), a really smart and thought-provoking character study, and just an all around engrossing, original cinematic experience that doesn’t fit any of the templates of the kind of stuff I normally watch, and is all the more captivating for it. So I would encourage you to go through with it.

It’s written and directed by Todd Field, who we of course know mainly as the actor who played Nick Nightingale in EYES WIDE SHUT, and he was also in EYE OF THE EAGLE 2: INSIDE THE ENEMY, BACK TO BACK, TWISTER and THE HAUNTING. He suddenly became an acclaimed filmmaker with IN THE BEDROOM in 2001, then LITTLE CHILDREN in 2006, and then he disappeared into a puff of smoke until finally returning last year holding TÁR above his head like baby Simba.

Blanchett plays Lydia Tár, famous and respected classical composer and conductor, introduced to viewers as well as a live New Yorker Festival audience within the movie with a torturously long list of credits and achievements. She’s giving a faux-humble-but-clearly-very-impressed-with-herself Q&A, saying all her clever lines and opinions, explaining her interpretations of the meanings of famous musical works, brushing off being the first female conductor of the Berlin Philharmonic and being called “maestro” and not “maestra.” The audience loves her. She says she’s experienced no gender bias. Maybe just no other woman in history was ever qualified until her. That must be what it was. END_OF_DOCUMENT_TOKEN_TO_BE_REPLACED 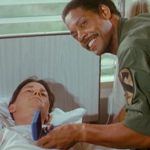 Like most of the other black directors I’ve been writing about lately Franklin started out as an actor. He was in FIVE ON THE BLACK HAND SIDE and an episode of The Streets of San Francisco and shit like that. His first feature as a director was NOWHERE TO RUN (also from ’89), a drama that stars Jason Priestley but also has Sonny Carl Davis from THE WHOLE SHOOTIN’ MATCH in it. END_OF_DOCUMENT_TOKEN_TO_BE_REPLACED