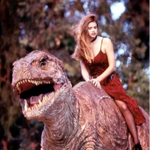 TAMMY is a movie from 1994 that I was vaguely aware of as a cheesy family comedy only released on VHS. I definitely confused it with THEODORE REX at times, but I knew it had young Denise Richards (her first starring role) and Paul Walker (his third movie, after MONSTER IN THE CLOSET and PROGRAMMED TO KILL) and was supposed to be pretty crazy. Then last year there was an important new development in film scholarship: somebody discovered a print of a “gory cut” of TAMMY. Turns out before it was released straight to video it was edited down from a very R-rated horror comedy (both terms used loosely). So it played Fantastic Fest and Vinegar Syndrome released a beautiful Blu-Ray special edition and now it’s playing on Shudder. END_OF_DOCUMENT_TOKEN_TO_BE_REPLACED