(SPOILER GENERAL’S WARNING: I wish I had gone in knowing less, so you probaly shouldn’t read this before seeing the movie. To be safe though I’ll try to be vague.)

You always kind of know what you’re gonna get with Tarantino, and yet, you never know what you’re gonna get with Tarantino. Every movie he’s made after PULP FICTION seems to throw people for a loop at first. Why isn’t JACKIE BROWN more like PULP FICTION? Why isn’t KILL BILL more serious, like JACKIE BROWN? Why is KILL BILL VOLUME 2 all this character and shit instead of all the killing like part 1? Why does he take so long to make his movies, what an asshole. Why did he make DEATH PROOF as a quickie just-for-fun movie, what an asshole. END_OF_DOCUMENT_TOKEN_TO_BE_REPLACED 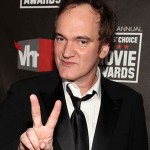 For me GRINDHOUSE was one of the great theatrical experiences of 2007. A rare modern instance of filmatists trying to put on a real show, and giving you more than your money’s worth. Two movies for the price of one, plus fake trailers – an affordable night or afternoon out. Yeah, I read about how it failed to make money for the Weinsteins, but guess what? That’s what happens when you spend decades buying other people’s movies so you can cut them, dub them, retitle them, sit them on a shelf for years, and then only allow them to be rented at Blockbuster. When you spend that long doing that many cruel and unusual things eventually your bi-yearly good deed will fail for you too. Because you are an asshole. END_OF_DOCUMENT_TOKEN_TO_BE_REPLACED

I am not going to be using the g-word in this review, because I am sick and fucking tired of hearing it. It’s a perfectly legitimate title for this concept, but here is the problem. Mr. Tarantino is a huge fan and expert on these types of movies, he is the human IMDb judging from some of those interviews. So I don’t mind seeing him talk about it in every article about KILL BILL VOLUME 1 and then KILL BILL VOLUME 2 and then when they announced this g-word movie, and then while he was filming it and now to promote its release. Tarantino can use the g-word all he wants, he has earned it. So I don’t mind him and the trailers for his movie trying to explain to the kids what the g-word means. END_OF_DOCUMENT_TOKEN_TO_BE_REPLACED