This kill-them-for-safety-purposes policy is obviously fascist and heartless, but it’s based in a reasonable fear that if this little girl can blow up cars with her mind what will she be able to do if she grows up? And will she do it? END_OF_DOCUMENT_TOKEN_TO_BE_REPLACED 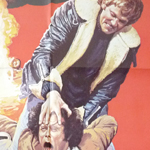 And being that that’s who he is, of course, he’s willing to identify the two guys who did it to the police. Or at least that’s the plan, but everybody starts saying he’s crazy to get involved. His wife, his sister, his sister’s fiancee – all of them think he should just stay out of it. So he gets second thoughts, and pretends he doesn’t remember anything. END_OF_DOCUMENT_TOKEN_TO_BE_REPLACED