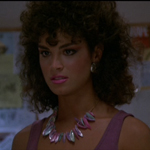 AVENGING ANGEL takes place 4 years after ANGEL. Lieutenant Andrews (now played by Robert F. Lyons) has become Angel (now played by Betsy Russell from DELTA HEAT and SAW III-VII)’s guardian and paid her way to leave the streets of Hollywood for a college somewhere a few hours away, where she’s studying law and excelling at track and field. She goes by Molly again and has a preppie boyfriend named Terry (Richard DeHaven, NIGHT OF THE CREEPS) who doesn’t know about her past as a gun-toting teenage prostitute.
END_OF_DOCUMENT_TOKEN_TO_BE_REPLACED