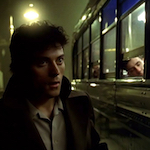 In the tradition of such films as FEAR IN THE NIGHT (1947) and NIGHTBREED (1990), Murdoch is unsure if he’s really a murderer. But we’ve seen stories like this before, so we figure he’s not. And it’s pretty clear that something unusual is going on here when the people the guy on the phone was warning about show up. They’re not cops, but “The Strangers,” a group of mysterious, pale, bald dudes in black coats and fedoras like a gang of Detective Nosferatus. They move strangely, have odd facial expressions and are a range of heights that make them look interesting walking around together. I’ll try to list them from tallest to shortest: END_OF_DOCUMENT_TOKEN_TO_BE_REPLACED