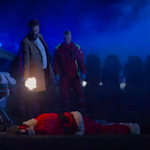 Whether Christmas is a religious holiday for us, or just a way to celebrate giving, or whatever, we can all agree that it’s mainly about trying to find more movies we haven’t seen that are about a killer Santa or some shit. That’s the true and sole meaning of Christmas, is what it says quite clearly in the Bible, and if you don’t believe me I challenge you to tell me which verses it’s not in. You can’t do it, can you? Case closed. Anyway the point is this year I saw CHRISTMAS BLOODY CHRISTMAS but for those of you who would prefer to have the same title but shorter there’s also CHRISTMAS BLOOD (Juelblod), a Norwegian one from 2017.

IMDb lists it as a horror comedy. It really doesn’t read as one to me, but maybe it’s an exceedingly dry sense of humor – there is certainly some absurdity to it, which is what I liked about it. It’s very openly a Santa Claus version of HALLOWEEN. It opens in the middle of the night on Christmas Eve, 2011, when a little girl and her parents get killed by a guy dressed as Santa. The police show up in time to shoot the Santa, and Detective Thomas Rasch (Stig Henrik Hoff, THE THING premaquel), who’s been chasing this guy for 13 years, unloads his gun into him while he’s down. END_OF_DOCUMENT_TOKEN_TO_BE_REPLACED