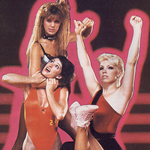 The director Brett Whitcomb and writer Bradford Thomason actually did another nostalgic documentary about a colorful pop culture oddity that only could’ve happened in the ’80s, THE ROCK-A-FIRE EXPLOSION. I recommend that to anybody that wants to see a movie about the animatronic bears and gorillas and shit that played music at the Show Biz Pizza chain, the weird guy that invented them, the crazy coke-fueled hey day when the company was on top of the world, the inevitable downfall, and the dilapidated warehouse where he still keeps all the old crap he has left. That’s real interesting stuff, GLOW actually seems kinda predictable compared to that but, you know, it’s about women who used to paint their faces and wave chainsaws around and rap and bodyslam each other on TV. I’m gonna watch it. END_OF_DOCUMENT_TOKEN_TO_BE_REPLACED