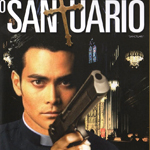 It has a convoluted chronology: it starts with our Catholic priest hero Luke Kovak (Dacascos a year after DRIVE) in a Vatican interrogation room being questioned in Italian about what happened six days ago when he got attacked by some killers from his secret past. From the story of six days ago it keeps flashing back to the larger backstory of his former career doing dirty deeds for the government and why he went into hiding to get away from it. A few times he even remembers his childhood, when a priest was his role model until Dyson (Alan Scarfe, CATHY’S CURSE, IRON EAGLE II, LETHAL WEAPON 3) took him and some other orphans and raised them to be experts in martial arts, guns and spycraft. END_OF_DOCUMENT_TOKEN_TO_BE_REPLACED