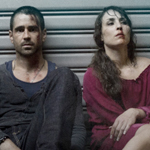 Nothing has changed since yesterday. I’m still against WWE Studios flying their prestigious banner above movies starring non-wrestlers. But I gotta admit that DEAD MAN DOWN is probly the best movie they’ve had their initials on so far. It stars Crusher Colin Farrell, Notorious Noomi Rapace and Terrence Dastructshon Howard in a moody revenge romance. (The token actual wrester is somebody named Wade Barrett as some character called “Kilroy.”) I think the movie it reminded me of most is LEON, but it’s a little more downbeat, and no uncomfortable underage business. But that’s a pretty abstract comparison, I don’t even know what it is that connects them. This is the rare movie that feels like it doesn’t really follow an existing template. Or if it does it’s a bunch of different templates collaged together in a weird way that’s hard to recognize. END_OF_DOCUMENT_TOKEN_TO_BE_REPLACED