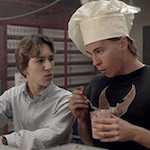 Another thing that surprised me is that Val Kilmer (TOP SECRET!)’s Chris Knight, the only character on the cover, is kind of the second lead. It wasn’t as shocking as learning that CADDYSHACK was about teenagers, but still, I wasn’t expecting it to center on 15-year old physics prodigy Mitch Taylor (Gabriel Jarret, “Boy at Funeral,” GOING APE!) who, while other whiz kids his age are staying home doing weird science with their horny friends, is personally recruited by Professor Hathaway to go to college and work on this project. He’s a genius, but very aware of how physically young and socially inexperienced he is, making this a very scary move. He’s heard legends of Chris, the only other person recruited to the team when he was a freshman, and can’t believe it when they turn out to be roommates. END_OF_DOCUMENT_TOKEN_TO_BE_REPLACED 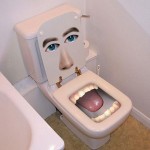 But I picked up the dvd for this one because of a certain powerful force – the force of young Chloe Sevigny’s eyes staring out at me from the cover. I think most of you know how I feel about this gal, ever since I first spied her in the Last Days of Disco picture where her eyes were able to cut through seven layers of postmodern bullshit spewing out of the mouths of the pretentious yuppies in the movie. This girl is a hell of an actor but the main thing I’m talking about here is the presence. She has the presence of a real movie star. In my opinion. So I’ll see any movie she’s in even if it has her with her hair slicked back, wearing a tie, like in this one. END_OF_DOCUMENT_TOKEN_TO_BE_REPLACED