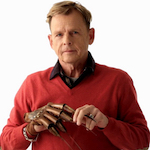 I didn’t know or understand any of that as a young horror fan in the ‘80s. I just knew part 2 was my least favorite. As the documentary says,  it was “not a fan favorite.” Jesse is a boy who moves into the house where Nancy lived in part 1, finds her previously unmentioned diary, starts to be haunted and then possessed by Freddy, who grows inside him and tears out of his skin. (The FX for that have always been amazing.) Then Freddy appears outside of dreams and attacks a fuckin teen pool party. At that time there were no instructions on how to make a Freddy sequel, so they just had to guess. Part 3 added the element of a group of misunderstood teens working together, being in dreams together, finding ways to fight back. It was so appealing it became the formula for three more movies, making 2 seem like it didn’t know what it was doing. END_OF_DOCUMENT_TOKEN_TO_BE_REPLACED