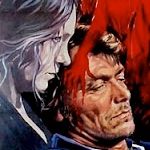 Clint plays Corporal John McBurney, a.k.a. Johnny, McBee or Mr. Yank, a Union soldier badly wounded on Confederate territory and rescued by 12 year old girl’s school resident Amy (Pamelyn Ferdin, CHARLOTTE’S WEB, THE TOOLBOX MURDERS). Initially headmistress Martha (Geraldine Page, THE RESCUERS, THE POPE OF GREENWICH VILLAGE) intends to hand him over to the Confederate soldiers who stop by periodically on patrols, but she decides he’ll die in their prison if she doesn’t help him heal first. END_OF_DOCUMENT_TOKEN_TO_BE_REPLACED