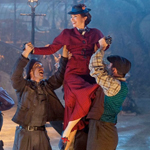 I really didn’t know what I was talking about with Marshall, to be honest. I’ve never even seen his Academy Award winning CHICAGO. But I was so bored watching PIRATES OF THE CARRIBEAN: ON STRANGER TIDES that it completely put me off a series I had loved up until that point. I didn’t trust him taking a crack at this much more sacred Disney ground, especially with a script from the guy that did fuckin FINDING NEVERLAND. But in retrospect Marshall had pretty good qualifications for this one. I’ve subsequently learned of his love for MARY POPPINS as the first movie he remembers seeing, his seriousness about honoring the original tone and using material from the P.L. Travers books, that he had Marc Shaiman (MY GIANT) start recording the score beforehand so he could play it while filming, and that he got the cast to rehearse the song and dance numbers for months, something he took from his days as a dancer and choreographer for the stage. Having seen it, all of that makes sense. END_OF_DOCUMENT_TOKEN_TO_BE_REPLACED