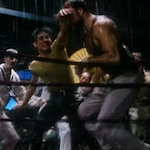 Never fear! The war ends and he comes home to Qingdao. Things have changed (there are orphan children for sale on the street – uncool) and his fellow vets are disgusted to find that nobody gives a shit about what they did, giving all the glory to the American sailors who are still stationed there and lording over everybody. END_OF_DOCUMENT_TOKEN_TO_BE_REPLACED