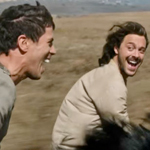 On its own merits, this BEN-HUR is fine. It’s light on the Bekmambetovian shamelessness that I was excited for, but it’s a solid enough retelling of Lew Wallace’s stirring 1880 tale of fictional Jewish elite Judah Ben-Hur, who is enslaved, freed, and returns to confront his childhood friend turned Roman Prefect Messala. END_OF_DOCUMENT_TOKEN_TO_BE_REPLACED