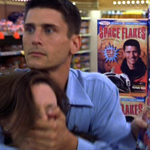 Men are from Mars, you know, so that’s where it starts. America’s first manned mission to Mars (co-financed by Pepsi, Sprint, Reebok and Bud Lite) ends up getting the crew infected by Species DNA, which speaks to either how bad their luck is or what a toxic shithole Mars is, because I swear they were there for like five minutes total. I kind of feel bad for Reebok on this, it doesn’t seem like they got their money’s worth. One of the astronauts goes down on the lander, plants the flag, makes a brief speech, digs up three soil samples and flies back to the shuttle. They don’t notice that the samples are steaming and dripping slime as they high five and get ready to be “Homeward bound, bay-bay!” END_OF_DOCUMENT_TOKEN_TO_BE_REPLACED