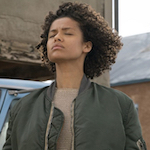 That description isn’t totally inaccurate, but sells it a little short, I think. It’s about a woman with some telekinetic type powers, but she doesn’t wear a costume, fight crime, fight super villains, or use her powers for heroism at all. She even explicitly says “We’re not super heroes,” and doesn’t seem to later change her mind about that. The story reminds me much more of FIRESTARTER than any comic book movie. Regular person made into a fugitive by being born with unusual gifts, running through small towns to avoid being a guinea pig for some secret government project. END_OF_DOCUMENT_TOKEN_TO_BE_REPLACED