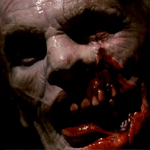 Gordon’s idea of CASTLE FREAK takes inspiration from H.P. Lovecraft. I’m sure you could also say that about what he eats for breakfast every morning. But he credits the short story “The Outsider,” about a man escaping from the castle where he’s lived alone for as long as he can remember. The screenplay is by Gordon’s longtime collaborator Dennis Paoli (RE-ANIMATOR, FROM BEYOND, THE PIT AND THE PENDULUM, DAGON), and its hook is simple: American asshole John Reilly (Jeffrey Combs, THE FRIGHTENERS) inherits a 12th century castle from a Duchess and brings his unhappy wife (Barbara Crampton, FRATERNITY VACATION) and blind daughter (Jessica Dollarhide, 1 episode of Major Dad, 2 episodes of In Living Color, 2 episodes of Dr. Quinn, Medicine Woman) to check it out with him. Little do they know that his dead relative also left behind the feral, mutilated man she’d been torturing in the dungeon for most of his life. Probly should’ve mentioned that. END_OF_DOCUMENT_TOKEN_TO_BE_REPLACED 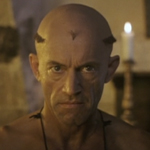 Even still, it kinda snuck up on me. It’s a Full Moon production, and they’re doing a period piece (Spain, 1492) in the one castle they have access to, lots of fake looking wigs, some actors delivering their lines in a modern tone, some not. And then there’s a shitty looking font on the credits and they still couldn’t bother to change the title (it calls it THE INQUISITOR). And as it gets into the plot about a woman falsely accused by the Spanish Inquisition it seems like it’s gonna be mostly sitting through gruesome torture scenes: public whipping, burning at the stake, some citizens enjoying it, others being forced to watch, people tied to racks, screaming, getting slashed and/or sexually humiliated. But that’s just the fuel to a story that really comes together, a nice amalgam of Edgar Allan Poe ideas, adventure and most of all an extreme caricature of the type of hypocrites who stand in judgment of others to hide their own faults. Gordon worked in theater for years before RE-ANIMATOR made him a Master of Horror, and I imagine this is alot like one of his plays. END_OF_DOCUMENT_TOKEN_TO_BE_REPLACED