During my intense POLICE ACADEMY research I learned that 2 years after part 1, story writer Neal Israel directed a movie called COMBAT ACADEMY. I don’t know if you can tell by just glancing at that title, but according to my calculations POLICE ACADEMY and COMBAT ACADEMY share one word and have the same syllable count. The cover uses the same font from the POLICE ACADEMY posters (and internal documents within the movies – look for that) and also the same sort of Mad Magazine style realistic painting of characters cartoonishly crowded together doing wacky things. I’m not sure if it’s an actual Drew Struzan, but if not it’s obviously based on that style. And Robert Folk did the music.
END_OF_DOCUMENT_TOKEN_TO_BE_REPLACED 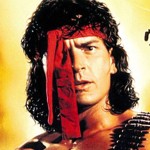 Mr. Sheen plays a fireman, and in the opening scene he saves a baby from a burning crack house. Nobody should go in there because all the vials of delicious crack ingredients are exploding, but for chrissakes there’s a BABY in there! So he goes in and he saves the baby. There is a pretty impressive amount of close up fire in this scene and you could tell the stuntman in Baxley was getting excited, figuring out how to get some good fire stunts in there. END_OF_DOCUMENT_TOKEN_TO_BE_REPLACED