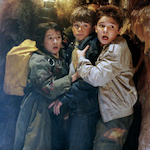 Fast forward to today. The futuristic year of 2020. That figurative trip to Chuck E. Cheese was considerably longer ago than the double-screening birthday party had been at that time. Since then I’ve learned things. I’ve been through things. My tastes have changed. The world has turned more goonie. I was kind of excited to see it again and find out if I still hated it. I had no idea if I would. END_OF_DOCUMENT_TOKEN_TO_BE_REPLACED