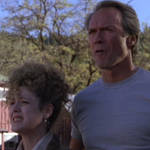 I’d say this qualifies as an action comedy. It takes itself seriously, it’s not broad like the EVERY WHICH WAY BUT LOOSE movies, but Clint goes further than his usual wry one-liners, because Nowak loves to wear disguises and play characters. In the opening he catches a guy by making him think he won a date with Dolly Parton from a country radio station. Just for this he does a “Crazy Carl Cummings” DJ persona and a briefly-British-accented limo driver. Since he later quibbles with his boss over gas mileage I really wonder how he paid for the limo and costume. I guess he just thinks it’s worth the expense to fuck with people. During the drive back to Sacramento he asks the guy what kind of music he wants to listen to, and when he doesn’t make a choice, Tommy puts on some Dolly Parton. END_OF_DOCUMENT_TOKEN_TO_BE_REPLACED