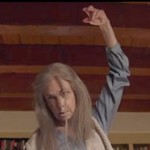 THE VISIT is not a rebirth of the once promising writer-director, but it’s a positive step. It shows an awareness I didn’t know he had. Instead of floundering with ambitions far beyond his abilities he’s decided to slum it in the middling subgenre of the Jason Blum produced found footage/fake documentary horror movie (see also: PARANORMAL ACTIVITY 1, 2, 3, 4 and GHOST DIMENSION, THE BAY, AREA 51, THE GALLOWS, UNFRIENDED 1 and 2). While the format is usually used as a workaround for filmmaking competence and professional actors, Shyamalan treats it as a creative challenge. It never seems like laziness, it seems like a puzzle. Can he use this “kid with handheld camera” bullshit and still get in some of his favorite things: great performances by young actors, some beautiful shots, some sadness and sentiment? END_OF_DOCUMENT_TOKEN_TO_BE_REPLACED