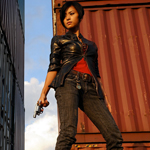 Ngo’s character is known as Phoenix, and she’s the hard-ass leader of a crew doing an arms deal as a ploy to steal a certain laptop with access to— well, doesn’t really matter. Whatever. The international conflict is of no interest to her, she just needs it because her boss (Hoang Phuc Nguyen, CYCLO) needs it, and he’s a scary guy who wears white suits and shades and thinks he’s really cool and deep for repeatedly comparing human beings to the pieces on the go/chess type game he plays in his limo. Fuck this guy. END_OF_DOCUMENT_TOKEN_TO_BE_REPLACED