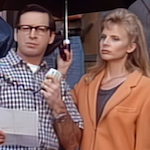 The director is Roland Mesa, who had only previously directed an interview with Tim Burton about EDWARD SCISSORHANDS, and only followed with a 1994 episode of Tales from the Crypt that was the first credit for Ethan Suplee. But it has the same writers as the theatrical movies, Steve Zacharias & Jeff Buhai. Guardians of the REVENGE OF THE NERDS saga. END_OF_DOCUMENT_TOKEN_TO_BE_REPLACED