Things have changed. Far fewer straight up action movies are made than in the ’80s and ’90s, and viewing them is not as common of a ritual for young people growing up. The fringe market of DTV has mostly shifted to VOD, a riskier business model since people actually have to watch the movies for them to make money. So, weirdly, this new KICKBOXER (released to VOD on Friday) was made with care, in hopes of people liking it. You can tell they’re genuinely trying to recapture what was fun about those movies, but in a modern context – by which I only mean it has nice digital cinematography of sunny Thailand and many of the opponents are played by famous UFC fighters. END_OF_DOCUMENT_TOKEN_TO_BE_REPLACED 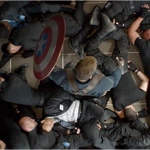 Okay, bad news first: CAPTAIN AMERICA TOO is pretty much Marvel’s post-action movie. It has a good action movie type of plot: Captain America finds out his agency S.H.I.E.L.D. is compromised, has to go on the run, has to figure out who he can trust and operate without his usual resources to uncover and defeat a vast conspiracy. He has to fight two different legendary warriors, both with some “just how badass is he?” buildup, and one of them even played by the great UFC champion Georges St-Pierre. The Captain gets continually chased and attacked by a crew of headset and vest wearing soldiers led by Frank Grillo of WARRIOR and THE GREY. There are many, many fight and chase scenes involving different fighting styles, fun acrobatics, various forms of transportation (motorcycle, SUV, robotic wings, helicarrier), weapons, super strength, super parkour, colorful technologies, interesting locations, clever gimmicks, epic destruction, badass dialogue and good character and plot motivation. Everything you want in a great action movie except… END_OF_DOCUMENT_TOKEN_TO_BE_REPLACED