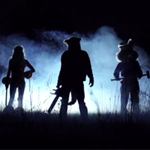 I’ve been saying for a little while now that a scary idea for a horror movie would be a TEXAS CHAIN SAW MASSACRE or HILLS HAVE EYES type of setup, but the killers are furries. You know, they wear masks, they have a different way of life that’s hard for us to relate to, they may even behave like animals. It’s kind of a goofy idea but I really think it could be scary.

I admit that this is prejudicial on my part. People role playing as cartoon animals is something that I don’t understand and that makes me uncomfortable – that doesn’t mean I should judge people for it. But there’s this documentary called FURSONAS. I haven’t seen it, but do a Google image search for the title and you’ll probly see the cover, with its cartoon dog mask. Fairly non-threatening, but creeps me out, maybe because I associate it with the kinds of pictures you’ll see around it. You’ll get many wolf, leopard and fox people drawn from all angles. Doing the search now I see a goat boy with no genitals but very human muscles and ass. I see a donkey with nipples wearing a leash and bikini with a huge bulge. END_OF_DOCUMENT_TOKEN_TO_BE_REPLACED