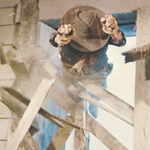 The title COMIN’ AT YA! is not a lie. Especially the exclamation point. The stereoscopic mission statement of this movie is in extreme opposition to the modern conventional wisdom that it’s bad for 3D to have gimmicks and things reaching out at you. The philosophy here is to stick knives in both eyes of the modern limp 3D and then pull them out and then jab them in and repeat and repeat and repeat. To date I think my favorite 3D experiences have been FRIDAY THE 13TH 3D and the three Robert Zemeckis mocap movies. Even compared to those, this is by far the 3Dest movie I’ve ever seen.
END_OF_DOCUMENT_TOKEN_TO_BE_REPLACED