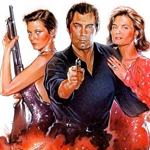 One summer of ’89 joint that seems older than most of the others is Timothy Dalton 007 movie #2 of 2, LICENCE TO KILL. It’s got a definite ’80s action influence in that James Bond is supposed to turn in his proverbial badge and actual gun (he keeps the gun though) and goes rogue to get revenge on a Colombian drug lord named Sanchez (Robert Davi, CITY HEAT, RAW DEAL, ACTION JACKSON, DIE HARD), who has invented a novel way to smuggle cocaine (mixed with gasoline). And the theme by Gladys Knight and end credits song by Patti Labelle could probly slip onto a BEVERLY HILLS COP soundtrack without causing a scene. It’s also pretty violent, and was seen as a darker interpretation of Bond, which to some was upsetting and to some others was more in keeping with the books by Ian Fleming. But in most ways it’s old timey James Bond shit with elaborate stunt sequences, gadgets that make computery sounds (what good did it do him to disguise the explosives as toothpaste and cigarettes, by the way?) and multiple gorgeous women who throw themselves at Bond for no reason. END_OF_DOCUMENT_TOKEN_TO_BE_REPLACED