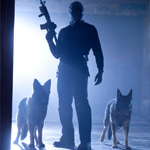 If you haven’t heard of THE COLLECTOR it’s because it was a pretty low key release, opening on 1,325 screens. The first SAW movie was released on almost a thousand more screens. I make the comparison because this one’s definitely in the SAW vein – in fact it started with a rejected script for a SAW sequel. It has a genius inventor/torturer in an S&M mask who sets up preposterous contraptions, bear traps and hidden razor blades in the sizable home of a rich family. But the cool gimmick is that the protagonist Arkin (Josh Stewart, THE DARK KNIGHT RISES) is a traitor who installed the security system and then tried to rob the place while they were supposed to be on vacation, not tied up by a maniac. He stumbles on this nightmare and tries to do the right thing and help them. They’re like “I’m so happy to see you! Wait– why are you here?” END_OF_DOCUMENT_TOKEN_TO_BE_REPLACED