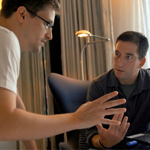 Well, it’s most of those things, except it’s not at all a talking head documentary. What I didn’t know going in is that this movie is part of the leak itself. Before Snowden even met with journalist Glenn Greenwald about the National Security Agency secretly working with telecommunications companies to spy on the phone calls and emails of Americans not even suspected of any crimes, he contacted documentary director Laura Poitras to document it. So this is not a movie telling the story of what happened. This is actual footage of it happening.
END_OF_DOCUMENT_TOKEN_TO_BE_REPLACED