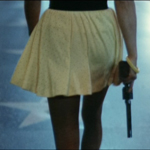 ANGEL is a story about a young girl named Molly (Donna Wilkes from JAWS 2 and GROTESQUE) who lives near Hollywood Boulevard and buses out to the North Oaks Prep School. She gets straight A’s, she seems very innocent, and when a super nerd at school (who looks easily 35, but it’s okay because she’s 24 in real life) asks her on a date she turns him down by saying her mom says she’s too young to date. I thought she might be telling the truth, but after school she goes back to the boulevard, where everyone calls her Angel, she puts on makeup and starts walking the strip. Yep, our little angel is a teenage prostitute. It quickly becomes clear that she’s paying her own way through school, and that there’s a reason she’s not letting anyone into the room where she says her paralyzed mother is holed up.
END_OF_DOCUMENT_TOKEN_TO_BE_REPLACED