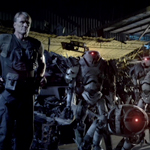 It’s almost the same story: group of mercenaries led by beloved action icon of the ’80s and ’90s (in this case Dolph) patrols through a quarantine zone where a plague turns everybody into violent monsters (in this case running zombies instead of vampires) while a group of bland survivors walks slowly and talks about boring shit in a large building. They kill a bunch of the monsters, splattering that CGI blood that dissolves in the air, and there is some running around and stuff. Seagal used a sword, Dolph doesn’t, but he does meet a guy named Elvis (Jen Kuo Sung of NO RETREAT, NO SURRENDER 3 and BLOODMOON) who does. And he knows the military plan to bomb the whole area to stop the virus so he bands together with the survivors he meets and they try to get out of there before it’s too late. The end. END_OF_DOCUMENT_TOKEN_TO_BE_REPLACED