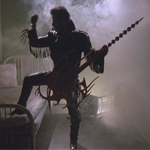 Much has been made of the first one being written and directed by women, and what that means in a slasher movie centered around a dude with a phallic drill murdering teenage girls in nighties. This one is written and directed by a different woman, Deborah Brock, and has a rare slasher movie occurrence of the female gaze in an opening dream sequence where Courtney pictures her crush Matt (Patrick Lowe, PRIMAL RAGE) shirtless, smiling, throwing a football, while she’s in a non-revealing nightgown. END_OF_DOCUMENT_TOKEN_TO_BE_REPLACED