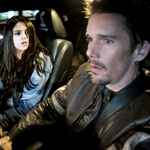 Then at some point he said “Fuck it” and decided he was gonna do a bunch of genre movies, mostly ones with ridiculous premises. I think DAYBREAKERS is a real under-the-radar gem all around, regardless of Hawke’s participation, but SINISTER and THE PURGE are corny movies elevated by his commitment to the roles. I think he’s got a little Kevin Bacon in him. If he signs onto a movie about a dumb looking demon who haunts super-8 home movies and children’s drawings or whatever he’s gonna give it equal or greater effort than what he did in SNOW FALLING ON CEDARS. I respect that. I like him. END_OF_DOCUMENT_TOKEN_TO_BE_REPLACED