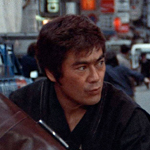 RETURN OF THE STREET FIGHTER (which, it’s important to note, is “filmed in Actionscope”) has the same director as THE STREET FIGHTER (Shigehiro Ozawa) and came out in the same year (1974). And I’m sure that was possible partly because it’s only 80 minutes long and padded with black and white flashbacks to two of the first movie’s fights, as well as the same childhood flashback, and it has a pretty long section that’s just the people from different karate schools demonstrating different weapons and techniques that will be used against evil-code-of-conduct-following anti-hero Takuma Tsurugi (Sonny Chiba) – punching through stacks of rock plates, or swinging “NUNCHAKU CLUB” or “SAI DAGGERS” or whatever the on screen text calls them in the American release. Somehow it’s still a great fuckin movie. END_OF_DOCUMENT_TOKEN_TO_BE_REPLACED