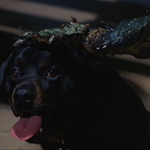 But I realize now that I was too close. It was too soon. I wasn’t ready for it yet. But now, after a quarter century of experiencing life in a world where there is a FLY II, no matter our moral objections… shit, I enjoyed this one. It’s kind of like The Fly himself. It shouldn’t exist, but it does, so what’s it supposed to do? It makes a go at it. END_OF_DOCUMENT_TOKEN_TO_BE_REPLACED